One of our recommendations in the category
"Other flirts and dating sites in UK": 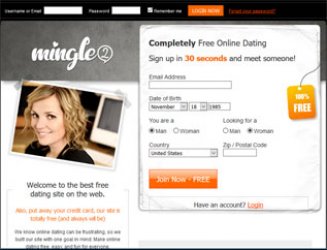 Quite popular around the world, the free online dating site Mingle2.com offers users the ability to talk and chat with singles on an international scale. According to our latest counts, we also discovered that there were around 20,000 users in the UK.

After login, we found that Mingle2 was very much a social dating as well as flirt site. We were able to search for various members of all sexes and genders. Signing up didn't take long for us either, although the confirmation took a while which was certainly a bit irritating.

Nowadays most sites have a mobile version, and Mingle2 is no different. The mobile site is a little tacky looking, but it does the job. For those who decide to use it regularly, there is also a native app version. This is available for both Android and iOS systems so there's no need to worry here.

There is a rather basic search feature on Mingle2, although we were surprised to find just how flexible it was. We could search not only in the UK, but also around the world. This makes the site useful for making international contacts. Another quirk was that we could change our own gender while searching.

Other features include the Community forums. In spite of the overload of ads on the site, Mingle2 forums are relatively lively and active. The majority of users appear to be from the United States, but there are also a considerable number of UK members on there too.

We were a little disappointed with Mutual Match. The entire function seems rather basic. You are thrown up a profile suggestion and click either Yes, No or Maybe. Yes simply indicates that you like one another, but it also lets you add that person to a special list. Maybe is rather ambiguous...

Regardless of how basic Mutual Match is, it turned out to be a rather good icebreaker!

Extra features are available on Mingle2 and all you need to do is upgrade. Profile views can also be increased by ranking your higher in the search results. Another handy feature is that you can browse profiles while invisible.