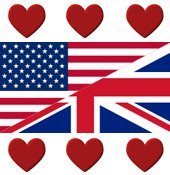 Dating differences between the US and the UK

All around the world, people from different cultures take part in the ritual called dating. Each culture naturally does it a little differently. But what about the USA and the UK?

Even though both share the same language, there exist lots of cultural differences, which range from the types of food they eat (fast food vs. pub food) to the sports they love (oval-shaped football vs. round-shaped football) and even differences in vocabulary.

And when it comes to dating? Are the two countries more alike than different? What are the differences in the dating culture between the US and the UK?

When it comes to the first date, Americans are more ritualistic here than their colonial cousins. For example, a guy would pick his date up at her apartment with flowers or a bottle of wine before going out on the first date. And American women might even have some certain rules pertaining to the first date like no kissing!

In this regard, the British are much more laid back. They take a more of a go-with-the-flow attitude than anything else. If the date is going well, there is no reason to put any restrictions on the evening.

If the first date goes well, then maybe there might be a second, third, etc and then one can proudly say “we are dating”. But what does that entail? Here, there is also a difference between the two cultures.

Well, in the end, there really isn't a whole lotta difference between the two cultures. Both are really about putting yourself out there, working up the courage to make the first move and see where it goes.

The best thing that we can learn from both cultures is that finding a partner is not that easy for everyone and sometimes it does take some work. But don't forget the old saying "Fortune favors the bold!", so go out there and give it a try!